There’s a lot that’s notable in the Governor’s transit task force report (one major takeaway: Metra is just the worst), but me being me, I’m going to pick out these two graphs: 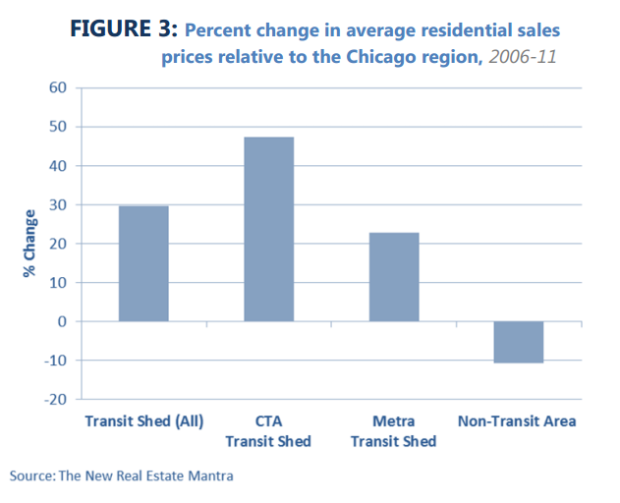 (I’ll disclaim here that yes, of course, some neighborhoods around public transit on the South and West sides lost population because people wanted to leave, not because of zoning, and that’s certainly a part of Chicago’s underperformance in household growth near transit. But two things about that: 1) The fact that overall housing prices near transit went up much faster than in other areas even despite stagnation in large parts of the South and West sides suggests that there is, in fact, huge demand to live near transit in most of the city; and 2) As I’ve said before, if your defense of a city’s affordability rests on highly segregated neighborhoods with relatively high crime, poor schools, and poor access to basic amenities like grocery stores, I think you’re missing the point.)

This is a huge problem for equity, of course, since forcing people of moderate and lower incomes away from transit forces them to pay more for transportation than their wealthier would-be neighbors, which is pretty perverse. But it’s also a problem because a train station is only useful to people who can get to it. Chicago has an enormous rail infrastructure that is, on the whole, massively underused, largely because we make it illegal for very many people to live near our rail lines. This is an especially egregious problem with Metra – a topic I will be taking up at some point in the future – but it’s also the case with the El.

As a result, the many hundreds of miles of railroads we have – railroads that are quite expensive to serve and maintain – aren’t doing nearly as much for us as they could be. It’s wasteful both in a monetary sense – not only because a given dollar spent on rail could be transporting way more people, but because we’d have more money if more people bought fares – and in all the social, economic, and environmental ways that having a relatively higher proportion of people taking public transit is helpful.

Anyway, I read those charts yesterday, and then this morning Steve Vance forwarded me an email from Gold Coast/Lincoln Park alderman Michelle Smith:

I am writing to inform you of a recent local zoning change in the Gold Coast I enacted on your behalf. This change resulted in a significant down-zone of the property located at 20 E. Scott Street, located at the intersection of Scott and Astor Streets.

The prior zoning classification for this parcel was “RM6.5,” which has no height restriction. Area residents, the Gold Coast Neighbors Association, and the Near North Preservation Coalition requested my assistance in adjusting the parcel’s zoning classification as a preventative measure against future overzealous development in the neighborhood.

I therefore introduced, and City Council has recently approved, a re-zoning of the property to an “RM5” classification, meaning that any new development at this site would be limited to a height of 47 feet.

My first thought was: well, maybe this is one of those gorgeous old Gold Coast townhomes. I’m not necessarily for protecting all of those, but I don’t think it’s ridiculous, either.

…which is apparently so integral to the Gold Coast’s character that the government must step in to make it illegal to build anything denser.

Despite the fact that the building literally across the street looks like this: 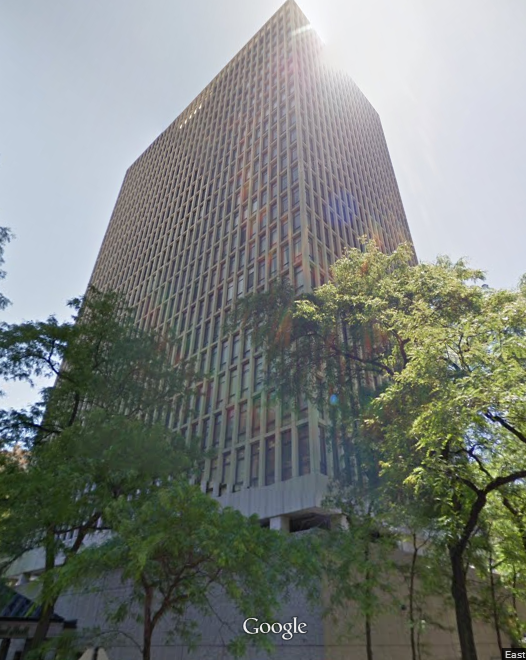 And one block down there’s a building that looks like this:

…and so on. It’s interesting that even when the character of a neighborhood is already highrises, local well-to-do people find a reason to argue that highrises are inappropriate. Sorry! they say. I guess we’ll just have to enjoy our proximity to downtown jobs, grocery stores, the lake, good schools, safe streets, and so on, all by ourselves! Rats!

Oh, right, and it’s a five-minute walk to the Red Line.

I should make clear that I don’t think the issue here is really Michelle Smith. She’s responding to clear pressure from her constituents, which is what elected officials are supposed to do; moreover, if she enacted zoning policies that I liked, she very well might be thrown out of office in favor of someone who didn’t.

No, the issue is 1) that there needs to be some sort of organized constituent groups arguing on behalf of all the people who would benefit from denser development, because that’s how democracy works; and 2) that the system of giving individual alderman spot-zoning powers in their wards really needs to be reformed, because it almost guarantees that these decisions will be made by the people who benefit most from downzoning (the well-to-do who already live there), and will leave out the vast majority of people who benefit from upzoning (basically everyone else). As a result, even though the latter outnumber the former by quite a bit, the downzoners almost always win.