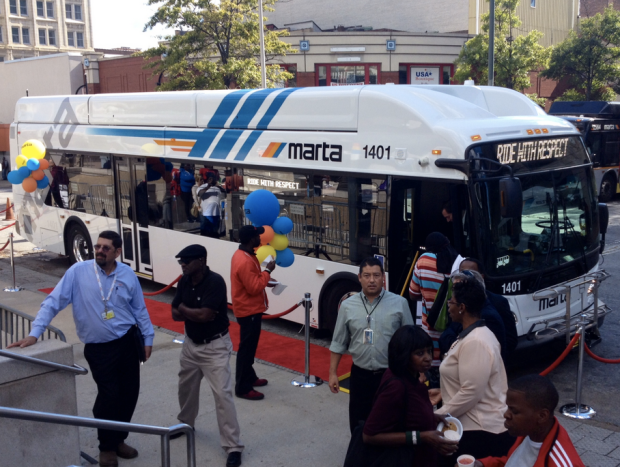 A story about MARTA from Atlanta Magazine accidentally stumbles on the secret to transit ridership (emphasis is mine):

Parker and MARTA supporters need to re-engineer a mindset that’s prevailed for more than a half century. In many major cities—New York, Chicago, and Paris, for instance—transit is considered the smart, efficient way to get around town. Everyone rides the subways or buses because they’re faster and cheaper than any alternative. But in car-centric places like Atlanta, Houston, or Los Angeles, transit has been treated as the travel mode of last resort. Consider: 30 percent of people who live in the New York region commute by mass transit, compared with just 3 percent in metro Atlanta. Here, the thinking has been, you take MARTA if you can’t afford a car, if congestion is high (a Braves game!), or if you want to avoid hassles, like parking at the AJC Decatur Book Festival.

Atlanta – and, apparently, MARTA’s new CEO – frame that last sentence as a negative “mindset” that Atlantans need to get over if they’re going to join the transit-friendly ranks of “New York, Chicago, and Paris.”¹ But the reason that people in New York, Chicago, and Paris take transit has everything to do with saving money and avoiding congestion, parking, and other driving-related hassles.

In other words, the difference between Atlanta and New York isn’t mindset; it’s that the same cost-benefit calculation about money, time, and comfort comes up with very different answers in each city. Transit isn’t “considered the smart, efficient way to get around town” in places like New York or Chicago – it’s is actually more efficient for many trips.

Job Accessibility by Transit in Atlanta and Chicago

(from the University of Minnesota’s Access Across America report) 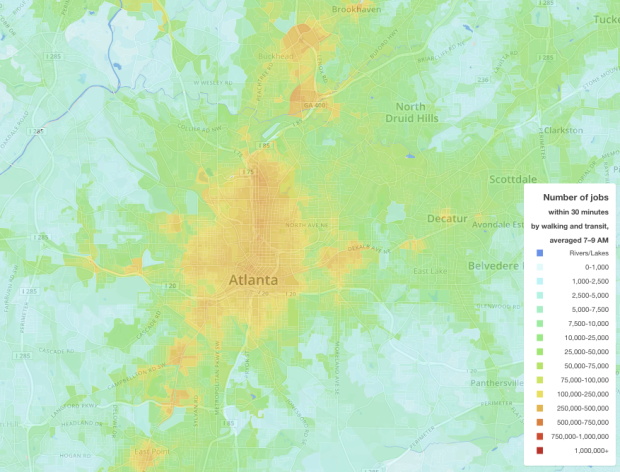 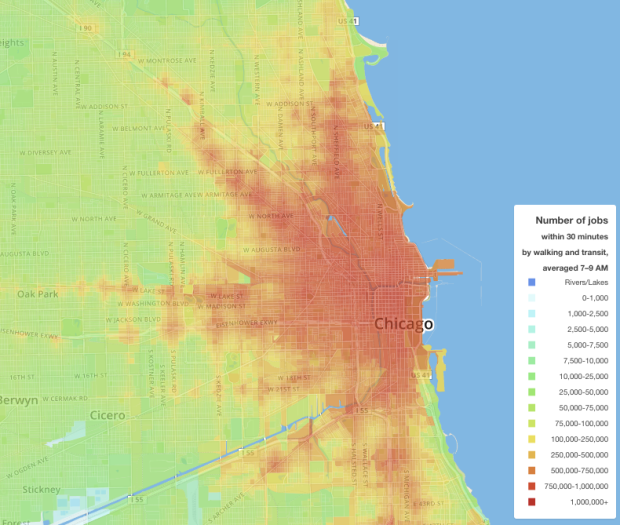 On the one hand, that sort of seems like good news: Atlantans aren’t just culturally predisposed to hate taking the bus or train. (To be fair, research suggests that culture does have some impact. People who move to transit-friendly cities from car-dependent places are more likely to have cars than people who move from other transit-friendly cities. But they’re still way more likely to give up their car than if they hadn’t moved.) On the other hand, it suggests that the solution to Atlanta’s low transit ridership is a) to increase the hassle of driving there, which is not exactly a platform for re-election, and b) to make transit more efficient for everyday trips, which can be pretty expensive.

Of course, it’s a little harder to be sympathetic about money problems when  the city of Atlanta [update: readers have pointed out that none of the funding for this project came from MARTA, although they have provided technical assistance, for which they were compensated] just used $100 million to build a 2.7-mile streetcar that will serve only a few thousand people a day and is slower than walking. Meanwhile, for about one-eighth of the cost of the Atlanta streetcar, Milwaukee is launching three new bus lines, each long enough to reach from the central city to the suburbs, and designed not to shuttle people around a handful of downtown precincts, but to connect them with otherwise-inaccessible jobs.