Over at City Observatory, I have a post riffing on recent posts by Nate Silver and the New York Times’ Upshot on segregation and the reproduction of inequality:

That is, it’s easier to send black children to inferior schools if their schools are all on one side of town, and white schools are on the other. It’s easier to target housing and mortgage discrimination against blacks – one of the most important causes of the wealth gap – if all the black-owned houses are in one area. It’s easier to unleash abusive policing and incarceration practices on black communities without disturbing – or even attracting the attention – of whites for decades if whites and blacks don’t live in the same neighborhoods…. If this is why we care about segregation, then Silver’s measure – which doesn’t care which racial groups are mixing, as long as there is some mixing going on – is less useful. What matters then isn’t just integration: what matters is that privileged groups live in the same places as traditionally oppressed groups, so that place-based discrimination is made more difficult. In the United States, that means whites and people of color living in the same neighborhoods. Where that doesn’t happen – even if an area is integrated with, say, blacks and Latinos – then place-based discrimination is still viable, and it will be much easier to reproduce racial inequality. 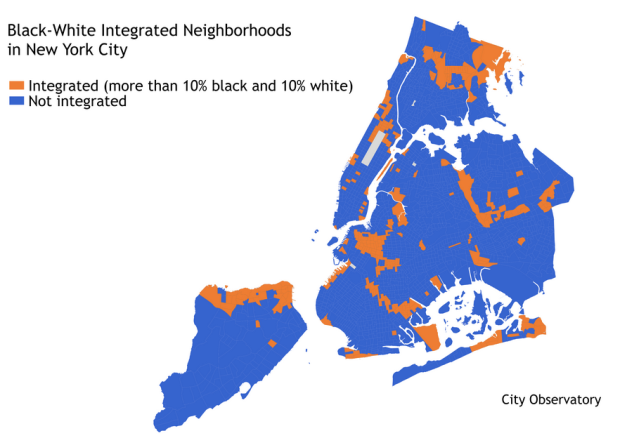