I’ve written these roughly in descending order of how much sense they seem to make for the city, but I should say that I think context matters an enormous amount in determining what kind of transit service makes the most sense, and this is meant more as an attempt at an outline of the tradeoffs involved for each option rather than a definitive ranking.

UPDATE: I should also have acknowledged that the cost estimates are verrrry rough; the methodology is at the bottom of the post, but several smart people have commented to quibble one way or the other, particularly with the street-running light rail numbers.

Sometimes, people say: why don’t we just build a subway? They might say this in reference to the Ashland BRT project, or the Belmont Flyover, or some other place where they’d like a rapid transit line but don’t want to disrupt the flow or aesthetics of the city above ground.

Unfortunately, I have bad news: This is extremely unlikely. It’s unlikely because American subways are just ungodly expensive. (Why are they so expensive? Go ask Alon Levy.) Take, for example, the 16-mile Ashland BRT project. If we held an Ashland subway to the average cost of an American subway, it would run about $17 billion. Even the five-mile first phase would set us back $5.5 billion – nearly 12 times more than we spent to deconstruct and then reconstruct the entire 10-mile length of the Red Line’s Dan Ryan branch in 2013. Chicago’s entire annual budget is only about $8 billion, and the federal government hasn’t been handing out checks for transit infrastructure projects on that scale for quite a long time.

And that’s sort of where the discussion ends. Subways have a lot of benefits – they don’t interrupt, and aren’t interrupted, by surface traffic; they’re protected from the elements; they can move lots and lots of people – but I say that in the spirit of someone window-shopping something very pretty but outrageously unaffordable.

While subways are potentially useful but logistically impossible, streetcars are logistically simpler but, in most cases, their benefits are much more doubtful.

I should note that I’m using a very particular definition of streetcars here. I have in mind essentially a bus on rails: a relatively short train set designed to travel in the same road lane as cars and other traffic. (Another type of rail transit that some people might call a streetcar, but which I’m calling “street-running light rail,” appears further below.) It looks something like this: 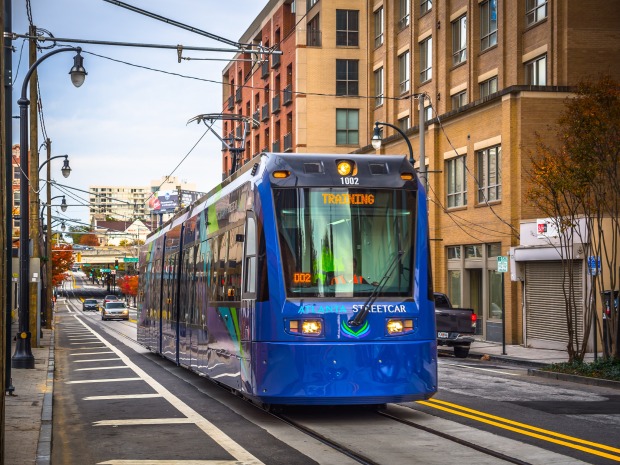 That’s the recently-opened Atlanta streetcar; note the automobiles in the same lane behind it. The problem with this sort of thing, from a Chicago-centric perspective at least, is that it has exactly the same issue that Chicago’s buses have: it gets stuck in traffic, and is therefore extremely slow. Actually, it’s worse than that: buses can move around a stopped cab or double-parked car; a streetcar can’t. In fact, one reporter found the Atlanta streetcar to be slower than walking.

The one advantage streetcars do have over buses is that they can hold more people. But that’s only an advantage if a) you need more capacity and can’t run any more buses, or b) you want to trade higher-capacity vehicles for less frequent service. Since there are virtually no bus lines on which the CTA can’t fit more bus runs – and since I don’t know of any Chicagoans who think that their local bus runs too frequently – those don’t seem super relevant here.

And, for all that, you have to spend $50 million – the cost of one of those super-fancy new L stations – to build each mile before you can even get up and running.

A cheap way to build a rail line that doesn’t have the traffic problems of a streetcar is to put it where there are already train tracks: in a freight right-of-way. That’s mostly what Chicago did with the Orange Line. There have also been proposals to create a line in a freight right-of-way just east of Cicero Avenue – the “Lime Line” in Transit Future.

The problem with this is that most freight corridors don’t go near major residential or commercial nodes. Here, for example, is the area around the Kedzie Avenue Orange Line station:

Unlike L stations on, say, the Green or Brown Lines, you have to walk a quarter mile or more through some pretty uninviting landscapes to get to the places that most people take transit to get to. That problem can be partly mitigated by integrating the station well with frequent buses that take people for their last mile, and the Orange Line makes an effort to do so – but that can still easy add ten or fifteen minutes to a trip, making it much less attractive. That may have something to do with the findings of a study last year that the Orange Line has not catalyzed development in the way that other transit lines have.

Elevated trains have some of the advantages of subways – they don’t have to even think about street traffic – but are missing lots of others. Namely: they’re exposed to the elements, and are considered by most people a bit of an audiovisual disaster. They’re much, much cheaper – enough so that one could imagine the city actually procuring the money to build one – but politically quite difficult to build in places where lots of people already live and have bought homes on the assumption that there would not be a train rumbling past every five to ten minutes all day.

But if you run them far away from where people actually live, then you have the same problem as freight right-of-ways: you’re not actually connecting people to where they want to go, which is usually the entire point of building a transit line.

This is essentially a streetcar with its own travel lanes. Advantages, then, include that it can bypass traffic jams without incurring the expense of building either underground or an elevated structure; it also is much more likely to run near homes and businesses, as it runs in an actual street rather than a freight corridor.

Unfortunately, these kinds of projects can still have problems with speed, since they may have to stop for traffic lights, and being in the middle of a busy street means they can’t reach heavy-rail speeds (the L, for example, can top out at 55 mph – which wouldn’t be allowed if it were running down Western). Still, it’s cheap and user-friendly.

It’s a little-known but important fact that there are far more Metra stations on the South Side than there are L stations. Some Metra lines also have freight traffic that limits the number of possible passenger trains, but for the several that don’t – including the Metra Electric District – there’s no reason that these existing passenger rail lines can’t be turned into regular L-type service relatively easily. Make some upgrades, buy some train sets, and run them every ten minutes or so, and boom, you’ve got a new rapid transit line.

Of course, the bigger issue is political. But with Toronto promising 15-minute headways all day on its commuter rail network, it’s a shame there isn’t more momentum for that type of conversion here.

¹ In every case but commuter rail conversions, I’ve come to these cost figures by averaging all similar projects currently under construction in the United States, as listed at The Transport Politic. There are a lot of problems with this: mostly, construction costs are so site- and project-specific that it’s really hard to generalize to a particular development in Chicago from things that are being done elsewhere. But this was, I thought, about as good as I could do – thus the qualification that these are only “ballpark” costs.

In the case of commuter rail conversions, because there is not a single such project under construction in the entire United States (though there is in Toronto!), and because the most likely such project in Chicago – the conversion of the Metra Electric line – has been studied and given a price tag, I just used that.