It’s a problem: CTA bus ridership is down—close to 20 percent between 2008 and 2016, even as rail ridership has increased by roughly the same amount.

I’ve written about this issue before, both in the context of the serious service cuts CTA buses (and others) have suffered over this time period, and more recently about the curious, and little-reported, shift in how people pay for rides on the CTA, and how that shift might explain part of the ridership decline.

But in this post, I’m going to present evidence that what might seem like a gradual, death-by-attrition sort of problem is actually largely accounted for by a completely inexplicable one-time ridership crash. In fact, two-thirds of the last five years’ worth of decline took place in a single month—for no apparent reason, and in a way that’s totally incongruous with the ridership patterns that followed and preceded it.

Why wasn’t this already obvious? Well, it can be harder than you think to get a straightforward read on ridership trends. One big reason is that there are strong seasonal patterns—so, for example, ridership is generally lower in the summer, when high school is out. In the chart of CTA ridership below, you can see clear up-and-downs that repeat every year.

So when the CTA or other agencies report monthly ridership changes, they don’t compare rides in one month to the previous month—otherwise you would just be getting seasonal trends, masking the “real” shifts. Instead, they compare ridership to the same month in the previous year. They also adjust for the number of weekdays and weekends, to make things really apples-to-apples.

That means that in some ways, it’s easiest to see trends in ridership not by charting the actual number of people who ride each month, but by charting these monthly year-over-year changes. If “real” ridership is unchanged, the first chart will still show seasonal ups and downs, but the second will just be flat.

So that’s what I’ve done below: Made a chart of the monthly year-over-year ridership changes on CTA buses and the L.

There are three things to notice here. The first is that monthly ridership trends for buses and the L tend to track each other: When the rail ridership line goes up, the bus ridership line usually also goes up, and vice versa.

We can think of that three-percentage-point gap (illustrated by the red line in the chart below) as representing the big, long-term, structural reasons that ridership changes: more Loop jobs and destinations, and white-collar workers in North Side neighborhoods with L access, means more train rides; outer neighborhood population decline, service reductions, and perhaps the rise of companies like Uber, mean weaker bus performance. From month to month, other things might happen—a particularly brutal winter could push ridership down, say—but against the background of these structural forces, which will tend to keep rail and bus ridership trends in similar positions relative to each other.

Which brings us to the Big Exception. In September 2013, the gap between rail and bus ridership growth was 2.0 percentage points; in October, it was 4.3 points; and then in November, it skyrocketed to 11.6 points. It then stayed at extremely high levels—on average, 13.7 points—for exactly twelve months, before abruptly returning to its previous three-point average.

What does that mean? It means that in a single month—November 2013—bus ridership cratered ten percent below where we would have expected it, before mysteriously leveling out again at that lower point in the very next month, and then continuing on its previous path of modestly underperforming L ridership trends. I say it cratered by ten percent because the bus-rail gap averaged 13.7 points, rather than three. And I say it happened in just one month because a one-time change will show up in year-over-year comparisons for exactly twelve months, until the prior year’s comparison month includes the change. That is, until you’ve gone all the way around the calendar, each new month is the first time you’ve measured that month at the new, lower level, so it shows up as a year-over-year decline, even though the only real change happened in the first month.

If that doesn’t compute, don’t worry, because the next chart hopefully explains the situation in a more intuitive way. It has two lines. The red line shows actual monthly bus ridership, in millions of rides. The blue line shows what would have happened i bus ridership had perfectly followed the “three percent” rule since January 2011, growing exactly three percentage points more slowly than L ridership.

As you can see, before November 2013, actual ridership behaved almost exactly like the ridership we projected using the “three percent” rule. In fact, in many places, the projected numbers track the real ones so closely that the lines are on top of each other. But then, in November 2013, they sharply diverge. If bus ridership had continued to follow the “three percent” rule, we would have expected about 25.4 million bus rides that month; instead, we got about 23.2 million—nearly ten percent less.

And that gap—after appearing suddenly in a single month—then holds roughly steady thereafter. In other words, again: Since 2011, CTA bus ridership has followed a predictable pattern, modestly underperforming L ridership—except for just one month, when a couple million rides per month suddenly disappeared and didn’t come back. 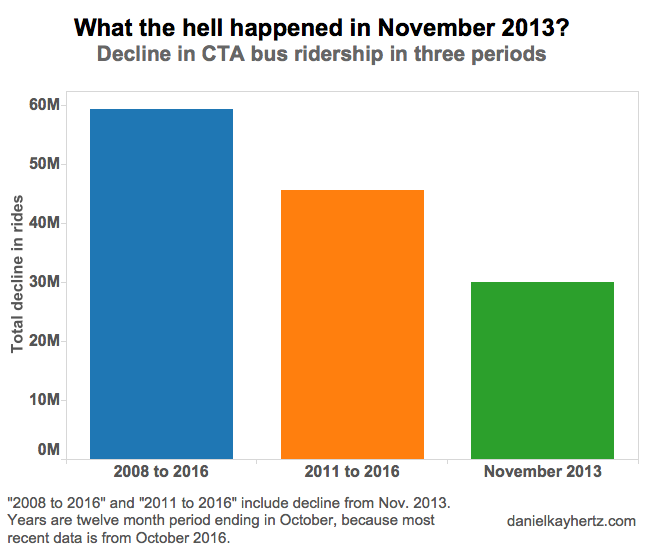 How big a deal is November 2013? Well, since 2011, annual bus ridership has fallen by nearly 46 million rides, or about 15 percent. Based on the projections above, November 2013 explains fully 30 million of those rides, or essentially two-thirds of the entire decline over the last five years.

And even if you go back to 2008—which includes ridership hits from the aftermath of the recession and the 2010 service cuts—November 2013 explains roughly half of the entire decline.

So what the hell happened? In short: I have no idea. That year, 2013, saw serious fare hikes, as I’ve written about, but they took place in January, 11 months before. That was also the year that Ventra was introduced—but the first Ventra cards became available in August, and the old fare payment system wasn’t put offline until halfway through 2014. There was a Ventra system crash on November 13, 2013, but the CTA estimated that they gave just 15,000 free rides that day—nowhere near enough to explain that month’s ridership crash, and no help at all in explaining why ridership would remain so much lower in subsequent months even after the crash had been fixed.

I will say that intuitively, I can’t imagine what sort of event—especially one that’s low-profile enough not to be obvious—would cause a one-time, seemingly permanent drop of 70,000 to 80,000 rides per day, essentially overnight, with no signs of unusual ridership patterns before or after. That leads me to suspect—though, again, without anything more than circumstantial evidence—that what we’re looking at is actually a measurement issue, rather than a ridership one. But what kind of measurement issue? I don’t know.

This post is long and convoluted enough, but for the sake of transparency I should note that the “three-percent” rule appears to mostly apply between 2011 and 2016 (and possibly beyond). From 2008 to 2010, the recession and harsh service cuts appeared to create a few other waves of difference, which mostly disadvantaged buses relative to rail.