1. The kids are in the city

Where do children live in the Chicago area? The dominant narrative is that they are in the suburbs, certainly once they reach five or six: most parents just don’t feel comfortable sending their kids to the Chicago Public Schools, nor raising their kids in an apartment, and they can’t afford private school tuition and the cost of a single-family home in the city. (I’m not going to give any evidence that this narrative is the dominant one; if you disagree, I would love to hear what you think the narrative is!)

I was curious about whether this was true, so I went and made some maps. (Full size at the bottom of the post.)

To be clear about what these show: These are the percentage of people in each Census tract who are children (under 18), grouped by decile—in other words, the cutoffs for each shade of blue are such that there are an equal number of Census tracts in each of the ten categories. The darker blue the tract, the higher the percentage of kids. The darkest blue tracts are in the top 10% for having the most children; the lightest blue are in the bottom 10%. In short, these maps show a ranking of which neighborhoods have the most kids per capita.

The map shows not just the city (which you can make out in the center, with its 77 community areas outlined), but much of the metropolitan area. After the city’s web of community areas, the other borders are counties.

I would say there are at least three notable dynamics in these maps:

A. In basically each decade, there are two big concentrations of children: In a suburban ring; and on the city’s South and West Sides.

B. In each decade, the suburban ring of children gets farther and farther away from the city. At the same time, the concentration on the South and West Sides moves outward slightly, spilling into some of the inner suburbs.

C. The gentrified North and Northwest Sides become very low-kid as they gentrify.

(There are also some sort of second-tier things that stand out: The growing concentration of kids in the North Shore suburbs above Evanston; the relative desert of children in some of the more middle-class black neighborhoods of the South Side, like Chatham.)

So what’s the verdict? I would say the conventional wisdom is substantially wrong. In fact, at this point, a random Chicago neighborhood is likely to have a much greater population of children than many suburbs—certainly in Cook, and even DuPage counties. That is, there are way more kids in, say, Washington Park or Hermosa than in Skokie, or even Naperville. The sort of Levittown, tract-homes-with-young-families kind of postwar suburbia seems to mostly be a thing of the past, or at least a thing of the far-flung suburbs, rather than the inner ring, or even second ring.

The difference, of course, is that the kid-rich Chicago neighborhood is very unlikely to be white, and likely to be lower income. As with so many things—”everyone I know in this neighborhood drives,” for example—the conventional wisdom is driven by the behavior of the white and professional classes, who do, in fact, seem much more likely to have kids in the suburbs than in the neighborhoods they populate in the city.

2. The kids are coming back to the North Side?

The number of kids is one thing; but to see trends, it’s helpful to map the changes in each decade. (Again, full size at the bottom of the post.)

Same as before, except now it’s the change in the percentage of children from one decade to the next. Tracts in blue are becoming relatively more full of kids; tracts in red are becoming less. Importantly, it’s not that blue tracts are seeing more kids in absolute terms: they might just be losing kids more slowly than the rest of the metropolitan area.

A. In some ways, the shifts here match what we saw in the first set of maps. From 1970 to 2000, the gentrifying North Side is falling in the children rankings quite rapidly.

B. In others, there’s a kind of inversion. In both the suburban ring and South and West Side neighborhoods with very high concentrations of children, the trend is mostly a falling in the rankings. That makes some sense, however, given what we know about both of those concentrations moving further out with time, suggesting a relative loss of children on their inner sides.

C. Here’s the big one: After generations of becoming virtually kid-free, the gentrifying North Side (really Lincoln Park, Lakeview, and North Center) ranked as one of the region’s fastest kid-growing populations from 2000 to 2010. If you look closely, you can see the beginnings of the trend from 1990 to 2000, as areas like Lincoln Park, very close to downtown, went from losing ground to roughly holding steady.

This matches some other reporting that gentrification has hit a kind of third wave in some of these neighborhoods east of the river, with artists having been replaced by upper-income childless professionals in their late 20s and 30s, who are now being replaced by mid-career professionals with children (and even more money). It also matches the growing trend of what you might call gentrification of neighborhood public schools. 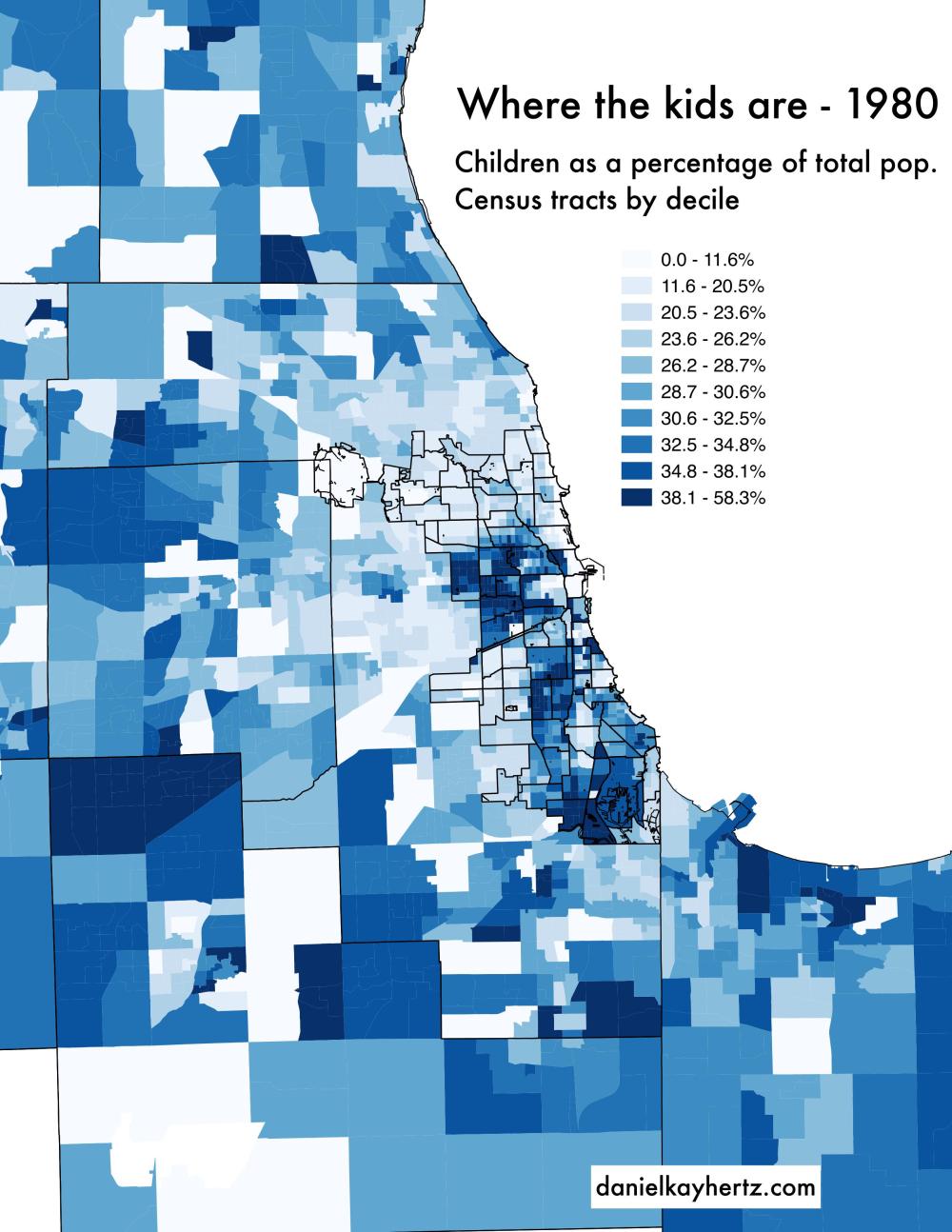 8 thoughts on “Where the kids are”